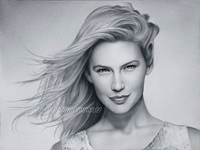 Valeria Mazza was born in Argentina in the city of Rosario in 1972. In Buenos Aires, after graduation, her friends' familiar friends helped to arrange a model for Valeria in the agency of an amateur fashion show. With her brilliance of beauty she conquered many photographers, she is often photographed in Latin American magazines.

Her first most notable advertising company began in the Caro Cuore Ragazza line in 1992, then in 1995, an international advertising company in Hawaii, where she was photographed by Dewey Nicks along with Ingrid Seynhaeve. Valeria demonstrates herself in bathing suits Tyra Banks in 1996.

Valeria Mazza has become a very famous supermodel, she fruitfully works as a model, in Paris, in Milan and in New York, where she has her apartment.

Valeria married in 1998 for Buenos Aires businessman Alejandro Gravier. Valeria is a mother, she has a son with whom she wants to see her often in her free time from work.